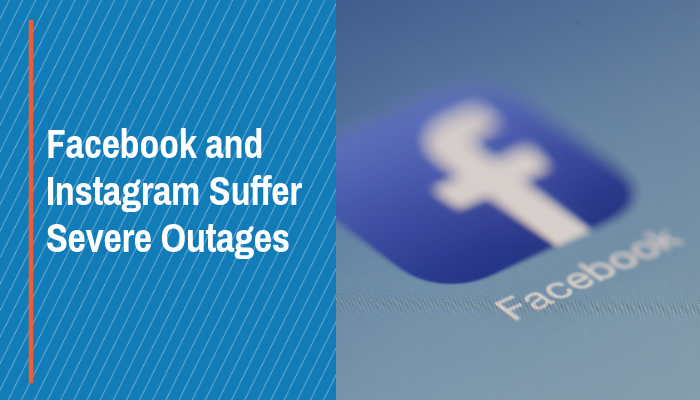 If you use Facebook or Instagram, you probably already noticed. Yesterday (Wednesday, March 13th) both apps were down for almost the entire day, resulting in social media users turning to Twitter to complain.

The outages began Wednesday morning, lasting until late Wednesday night for Instagram and into Thursday morning for many Facebook users. Users faced issues loading pages, logging in, and sharing anything on the sites. Both the mobile apps and the desktop versions were unusable.

So far, we’ve received no update as to what happened to these apps, both of which are owned by Facebook. Whatsapp, a popular texting app also owned by the company, also faced outages. Some users noted that apps connected through Facebook, like Tinder and Spotify, also faced issues with logging in.

We’re aware that some people are currently having trouble accessing the Facebook family of apps. We’re working to resolve the issue as soon as possible.

We’re aware of an issue impacting people’s access to Instagram right now. We know this is frustrating, and our team is hard at work to resolve this ASAP.

Both Instagram and Facebook reported that they were aware of an issue and working to resolve it, but failed to reveal what the problem actually was. Facebook did mention in a follow up tweet that the outage was not related to a DDoS attack – a distributed denial of service, essentially when many hackers take down a site by flooding it with too much traffic.

We’re focused on working to resolve the issue as soon as possible, but can confirm that the issue is not related to a DDoS attack.

We’ve yet to learn what caused these outages. The only update we’ve seen is from Instagram, with this pithy GIF-infused tweet:

While we can all appreciate a well-placed GIF, the outages were a detriment many users. Many people may have been frustrated simply because they couldn’t check up or kill time on their favorite apps, but businesses that pay to advertise on the platform were particularly irritated.

The outages come at an interesting time for Facebook, as the company is facing a federal criminal investigation over sharing user data with other tech companies like Apple, Amazon, Microsoft, and Samsung. From their newsroom account last night, amid the #FacebookDown and #InstagramDown debacle, Facebook tweeted the following:

It’s already been reported that there are ongoing federal investigations, incl. by the Dept of Justice. As we’ve said, we’re cooperating w/ investigators and take those probes seriously. We’ve provided public testimony, answered questions, and pledged that we’ll continue to do so https://t.co/v3QkokZq2p

Facebook has been under investigation previously and currently over improper acquisition of and misuse of customer data. There are no reports so far tying the app blackouts to this investigation.

Social media users turned to Twitter for information and to poke fun at these apps and at many users’ admitted dependence on them. We’ve compiled some of the best tweets in wake of the Instagram and Facebook blackouts.

Wife: Oh, no. You’ll have to interact with people in person.

Instagram models took some heat during the outages, as Twitter users joked about their lost income during the blackout.

All Instagram models realizing they have to look for new jobs since they are now unemployed. #instagramdown #facebookdown pic.twitter.com/ccGcm8AK81

What if Instagram never gets fixed?? So many models will lose their livelihood, careers instantly destroyed. Instagram model unemployment skyrockets, and girls who post about Fit Tea will be lined up outside of soup kitchens. THIS IS SO SCARY, PRAY FOR THESE WOMEN. #instagramdown

Even Cardi B joined in on the fun, teasing fans that she revealed a “big surprise” on Instagram while the app was down and her fans could not access it.

Both Instagram and Facebook are up and running for most users today, but still no word on why the outages occurred. Until we have more information from Facebook, we’ll have to stick to jokes and keep waiting.

Facebook is back up and running, and has explained that the outages were due to a server configuration change. They responded via tweet:

Yesterday, as a result of a server configuration change, many people had trouble accessing our apps and services. We’ve now resolved the issues and our systems are recovering. We’re very sorry for the inconvenience and appreciate everyone’s patience.