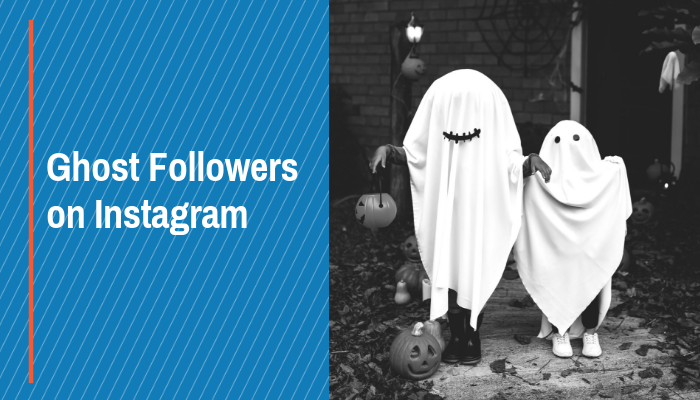 Most of us are probably familiar with the phenomenon of ghosting – when someone disappears without explanation and stops talking to or interacting with another person. Ghost followers are not the people who ghosted you (although they might be some of them).

What Are Ghost Followers?

Ghost followers are people who follow you but never engage with any of your posts. Most of us probably have a lot more followers than we do likes on pictures – not all of your followers like every single one of your posts.

While it’s normal that not every person sees and likes everything you share, there are some followers who never like, comment, or engage with any of your pictures or videos. These are ghost followers.

How can I tell if a follower is fake or not? Most fake accounts are fairly easy to spot. A fake Instagram account generally follows a lot of people, but has very few followers. They tend to have very few posts of their own, if any. Fake followers also have pretty obvious usernames: it’s often not a name at all, but a string of letters and numbers.

If you ever bought followers, they are very likely fake. Buying fake followers is a cheap way to boost your follower count, but it ultimately hurts your Instagram. Even if you bought fake followers who were supposed to like your photos, they often only like a few before becoming ghost followers.

Having fake ghost followers is useless: sure, you have more followers, but they never engage with your posts. It’s better to have a smaller, engaged following, whether your account is personal, for business, or if you’re an influencer.

Ghost followers can also be real people who are inactive on Instagram, or who simply don’t like your content enough to engage. These followers are less harmful than fake followers. While it’s not ideal to have followers who don’t pay attention to or engage with your content, real followers will not hurt your account.

Why Are Ghost Followers Bad?

You may be reading this and thinking that you’d like to have the most possible followers, regardless of whether or not they engage with you. Ghost followers are not necessarily the worst thing to have – sure, your engagement rate may be a little lower, but many Instagram users don’t pay attention to that anyway.

If you aren’t aiming for a certain engagement rate or growth for your account, then ghost followers aren’t that big of a deal. Many people only use Instagram to share with friends and family, so they may not care about things like engagement.

Fake followers, who are most often ghost followers, can be problematic, however. Having fake followers, especially if your acquired them by breaking Instagram’s Community Guidelines for authentic interaction, can negatively impact your account.

There are a few reasons why ghost followers may be bad for your account:

Ghost followers do not like, comment, or engage with your posts. This lowers your engagement rate. As we’ve stated, some people may not care about their engagement. Businesses and Instagram influencers, however, should.

An account with high engagement will be favored by the Instagram algorithm, will be more likely to appear on Instagram explore pages, and looks better all-around. High engagement provides social proof to others that your brand is trusted and well liked, which could lead them to follow your or buy your products or services.

An account with low engagement, on the other hand, may look shady, low-quality, or simply not well liked. Businesses and public figures with low engagement will do worse overall on social media and may lose followers or customers if they are turned away by the lack of engagement.

Instagram has announced efforts to crack down on ghost followers, although they did not use that term directly. In the past, the platform has purged fake followers, bot accounts, and other inactive users to keep Instagram social and clear of inauthentic usage.

Because of this, Instagram is likely to continue to remove fake or inactive accounts. Buying ghost followers is then pointless, because they may be removed anyway.

There are widely accepted rumors of an Instagram shadowban, referring to accounts being blocked for breaking Instagram’s Term and Conditions. Your account will not be deleted, but it is believed to be possible that your posts will be blocked from appearing to new users. One action that can incite a shadowban is having a lot of fake, ghost followers.

The shadowban will further hurt your engagement, and could result in more issues with your account. Holding onto fake ghost followers just for the number could potentially harm your account due to the shadowban.

Ultimately, it is your decision to keep or remove ghost followers. If they don’t bother you and you don’t mind the drop in engagement, they are mostly harmless.

There are apps that claim to be able to detect ghost followers. Most do so by looking at your last few posts and finding the followers who did not like or comment on those posts. This does not always give an accurate representation of who is actually a ghost follower.

Be wary to trust apps that claim to know which followers are ghosting you. Many users have reported that the names given are somewhat random, with apps telling them that their close friends are ghost followers. If you do choose to try one of these apps to get rid of ghost followers, proceed with caution.