What Does WYD Mean? 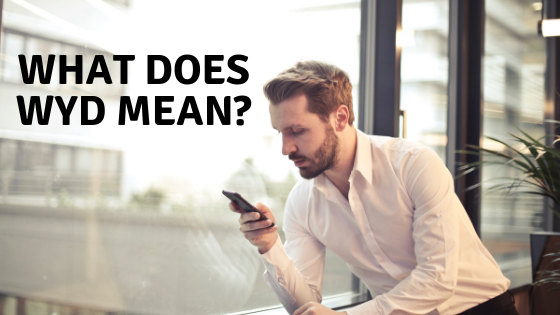 When the Short Message Service (SMS) was introduced to the world, we also started using our own unique language of smileys, emoticons and words shorn of necessary vowels and consonants. In today’s times, when social media has taken the world by storm, most tech-savvy users know what absurd acronyms like LOL, ROFL and OMG mean. However, these particular acronyms have been used quite widely in our daily conversations. This is why not many people would know the answer to the question: what does WYD mean? Let’s find out not only the meaning of the acronym but also what it may mean in different conversations.

Do you remember those times when you called up and talked to a friend after quite some time? The first question that would crop up in your conversation would be, “What are you doing?” or “What’s up?”  What does WYD mean? In social media conversations, the trend right now is to ask “What you doing?” WYD, simply put, is the acronym for “What you doing?”

Generally, WYD would be used in any text or messaging conversation to ask a friend or an acquaintance what he or she is up to these days. It is included to ease into conversation and lead to more enthusiastic discussions or to make plans.

It’s 7pm, i’ve already eaten and showered and now I’m chillin in bed. if you wanted to make plans you should’ve asked a month in advance

Does It Really Mean That?

WYD is used normally for friendly conversations. But it can also be used as a form of sarcasm in some conversations. Let’s understand all the possible contexts for using WYD.

The first context for using WYD would be one of friendly banter. It is without any sarcastic allusions or hidden and alternate meanings. But WYD can also be used as a form of mockery at someone who has just said something outrageous or unbelievable. The standard social response to such a person would be WYD, meaning “What you doing!” It expresses outrage or bewilderment at the other person.

The second context for using WYD could be a sarcastic challenge to a person to cause a reaction. For example, your friend could share a picture of a particularly unsavory dish and ask if you’d eat it, “WYD if your server brought you this?” WYD would then mean “What do you do?”, challenging you as a joke or in search of a funny reaction.

WYD is also being used as a dating one-liner, disguised as a pleasantry but obviously hinting at a one-night stand. When used with other hints, it can be perceived as a request for a date-night that would end inevitably with some sex. “WYD” by itself is a common late-night text, usually sent in hopes of an invitation to come over.

Finally, WYD also means, in some rare situations, “Who is your daddy?” This is indeed rare but it is nevertheless without sarcasm. When used this way, WYD can sound like a gloating, self-congratulatory statement from your friend as if to assure you that he is there to take care of things.

Like other acronyms being used on social media, the absurdly hilarious WYD means so much more than what it would normally mean. So, be careful the next time when you or your friend uses it in conversations.