What Does NVM Mean? 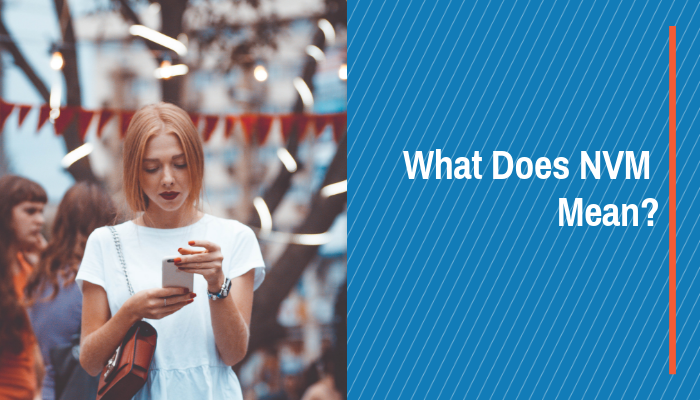 In this digital world, communication has become easier than ever. We can communicate across the globe within a couple of seconds. We can also use acronyms to make it even easier and faster. Some people may not be able to understand these acronyms if they are not familiar with the internet language, however. NVM is one acronym that is widely used on the internet, but you may not know what it means. NVM is part of modern internet communication and texts, used in casual online or text messaging.

The Meaning of NVM

NVM stands for nevermind. This is a common abbreviation is mostly used in online chat conversations and text messaging. The meaning of this acronym is the same as the word or phrase nevermind in real life (or IRL). It means that you should disregard a previous statement or question, which should be clear in the context that one uses it. NVM usually comes after writing something that the sender finds inappropriate or wishes to ignore. When someone is saying never mind, it is the clear indication that he wants to disregard something that he mentioned before.

When To Use NVM

When someone says NVM, they do not want you to waste your time and mental energy by thinking about something that they had just mentioned before. They discarded the message and want you to forget what was written.

For example, if you have written something wrong and you think that it might be insulting and embarrassing, you can write NVM. If you feel that you are wrong, you can write this simple acronym to make the other person understand you. In fact, this acronym helps you to change the topic and start a new and different discussion. You can also use NVM when you have nothing to say on a specific subject and you want to change the topic.

NVM can be used in many cases to avoid some unpleasant chat. But you cannot use it for all the cases. You cannot use it when someone is really upset and wants to further discuss the issue, as they will not want to ignore it. In this condition, NVM is not going to help you much. Instead, you should come forward and talk to resolve the issue. In brief, you can say that NVM can be used for small things and to avoid something unpleasant.

How to Use NVM

From the above, you should have an idea about the proper usage of NVM. As it is used in online conversations and text messages, you can use it for the people whom you know personally. Avoid using it in a business conversation. It will not give clarity and will only complicate the matter. It is best to use this acronym in personal conversations and in trivial matters.

In addition, you can use NVM in the lowercase as nvm. In most of the cases, the lowercase and uppercase versions are interchangeable and both these can be used for the same purpose. Also, it will be easy to type for smartphone users.

NVM is common internet slang that is mainly used in personal conversations. Feel free to use it whenever you find relevant.