What Does LMK Mean? 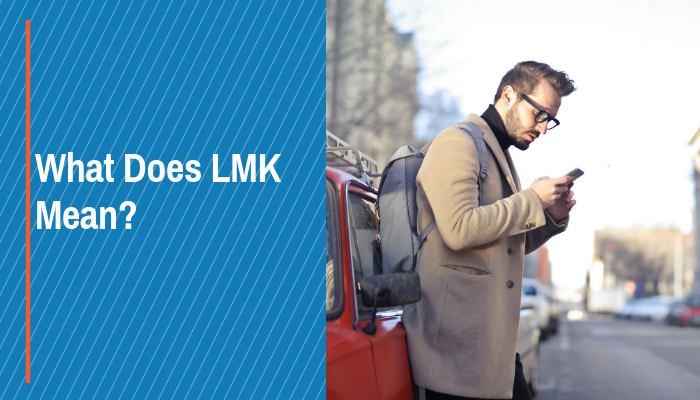 Interactions and transactions that take place in the digital world are instant. Because we are so used to quick messages and fast responses, most people have found ways to make online communication quick also. Thus, people started using acronyms of different phases and sentences to shorten texts, emails, and instant messages.

These acronyms deliver the same message as a full sentence, but in the quickest way possible. For this reason, many people are coming up with acronyms of commonly used phrases and sentences to make communicating online more efficient. Among popularized acronyms, LMK is one of the most commonly used, not only on social media platforms but in business conversations as well.

The Meaning of LMK

The full form of LMK is “let me know.”

LMK is used in a casual or polite manner, as it is a form of request and not an order. It also signifies that the other party has the liberty to get back to you whenever he or she is ready. There is no urgency or emergency when this acronym is used in an online conversation. In a way, the person sending this acronym is taking into consideration the other party’s schedule or interest as it is giving them the option to reply at their convenience.

LMK is usually used as a request to provide information about any personal opinion, decision, or future plan. The context depends on the surrounding conversation, which we can assume those involved in the conversation would have established.

Origin and Popularity of LMK

Even though it has been in use for longer, LMK become popular during the mid 2000s. The word become popular because of its usage on different social media platforms like Instagram, YouTube, Twitter, Snapchat, and Facebook. You can find different hashtags, stickers, and emojis using LMK on these social media sites.

How to use LMK

In both uppercase and lowercase, LMK means the same thing i.e., let me know. You can use LMK however you choose; capitalizing acronyms is generally viewed as more formal, while lowercase is more casual.

As discussed before, LMK does not signify any kind of urgency unless otherwise stated in the text. If you want a quicker reply, then add ASAP (As Soon As Possible) along with LMK.

Here it should be mentioned that the appropriate reply for this acronym is LYK which stands for “let you know.” If someone texts you, “LMK when you want to leave”, an appropriate response would be, “Okay, I’ll LYK”.

For more information on text acronyms, social media guides, and Instagram tutorials, check out Social Buddy or our blog.