What Does LOL Mean? 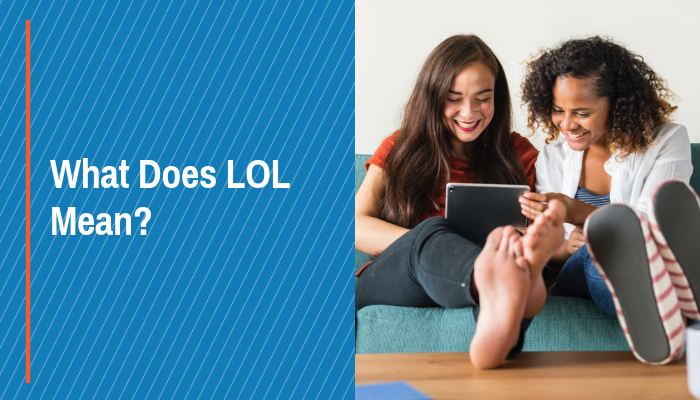 With the advent of instant messaging and SMS, many of us started using abbreviations to replace otherwise long words or phrases. The most common example of these abbreviations is LOL. Typically meaning “laugh out loud” or “laughing out loud,” this acronym is extensively used in news rooms, chat rooms, instant messaging platforms, emails and other real-time textual communications. But does LOL come with any other underlying meaning? Does it have a history? When was the first time it was used? Keep reading to learn everything that you wanted to know about the term LOL, courtesy of Social Buddy.

The Origin Of LOL

LOL as an abbreviation for laughing loudly is a popular element of internet slang. The first recorded use of LOL was on Usenet, but over the time it has become widespread in several other forms of computer-based communication. In certain cases, it is also used during face-to-face communication.

Other relatively emphatic reactions of laughter are LMAO, ROTFL, and LMFAO. In more obsolete forms, LOL can stand for “lots of luck” or “lots of love”, although this usage of LOL is usually a misinterpretation of its more universal meaning.

The Meaning Of LOL

As we already mentioned, LOL means “laughing out loud” or “laugh out loud”. Its first use dates as far back as the early 80’s, and within the next decade and throughout the 1990s LOL grew in popularity, becoming extensively used in almost every form of electronic communication.

Although LOL is a leading and highly popular acronym, it has started losing its popularity over the last couple of years. Now when people use it, hardly anyone expects them to be literally laughing out loud. At this point, it merely suggests a smile or a slight level of amusement. Sometimes, an LOL is added to soften the aesthetic of a message or to sound less serious.

There isn’t any specific rule about capitalizing LOL when used as a form of informal communication. Certain people prefer writing LOL in caps, while others may more casually type lol in all lowercase letters. Writing LOL in caps may emphasize the level of entertainment, or it may just be used to properly denote the acronym. LOL may indicate that you are laughing really loud in reality, while lol may suggest less enthusiasm. Often, lol is added to messages sarcastically.

You can also use LOL in spoken language, although saying it out loud probably suggests that you aren’t actually laughing out loud. Saying LOL may express a moderate amount of entertainment, or, again, may be meant sarcastically.

Unlike many other acronyms, you can use LOL both as a verb as well as an interjection. Some common examples of how to use LOL are when telling or responding to a joke. If you receive a funny message, you may simply respond, “LOL!”. Similarly, if you’re laughing because you heard something funny, you can say something like “I lol’ed so hard after watching that comedy show, I was almost crying”.