What Does MYOB Mean? 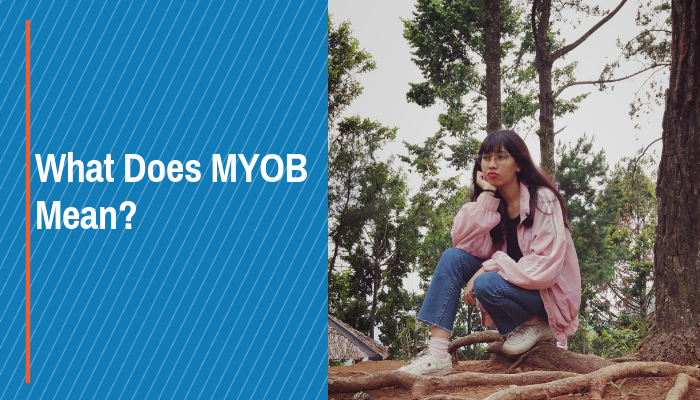 Due to the rise of the internet and smartphones, we are all accustomed to quick responses and conversations. Typing the whole sentence to express one’s point of view is not in trend anymore. Thus, the age of acronyms has flourished, and different acronyms are taking over the world of texting, instant messaging, social media chatting.

In the early 2000s, people used some common acronyms to express happiness, frustration, sadness and annoyance. To cater to this growing need of conversing with acronyms, many different acronyms became common knowledge and widely used. MYOB was made popular in the world of texting for this reason.

The Meaning of MYOB

The acronym MYOB stands for “Mind your own business”. This was created or became popular to express annoyance and to stop someone from asking personal questions. The expression itself is famous in both online and offline platforms.

In simple words, mind your own business tells someone that whatever they are commenting on is your private matter, and they should leave it alone as they do not have any right to know or have an opinion about your private affairs.

The acronym became popular in the world of social media, as when you share your content for the public to see, it usually attracts troublemakers or haters who comment mean or unnecessary things about the content. So, with this acronym, a person can express annoyance and let that person know that their unwanted opinion or advice is not appreciated.

This feeling can be expressed without writing any harsh words. You can avoid lashing out on that person in the heat of the moment and you do not need to worry about any consequence or backlash when you use MYOB.

This abbreviation was coined by Eric Frank Russell, who is a science fiction writer. He used MYOB in his short story And Then There Were None, which was published in 1951. However, it was the early 2000s when people started using MYOB regularly while texting or chatting.

Other Uses of MYOB