FOMO: What It Means and How To Overcome It 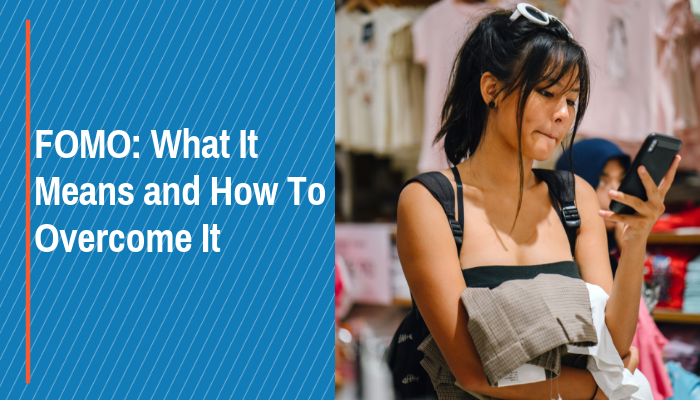 Even if you didn’t know what it meant, you’ve probably felt it. FOMO, the Fear Of Missing Out, is a new acronym that has also become a widely understood cultural phenomenon. Other acronyms like LOL, BFF, and WYD are more commonly known, but FOMO is different because it doesn’t just shorten an expression, it is a new expression that has become apart of the online and IRL vernacular.

While this acronym is a new way to express an all-too-common feeling, the fear itself dates back to . . . who knows when? It’s likely that FOMO has been around forever, along with other human fears and emotions.

While you may be feeling intense FOMO after a weekend spent in bed, it should comfort you to know that you’re not alone. A 2014 study revealed that 69% of millennials experience FOMO. This number may have grown since 2014, as social media has become even more ingrained in our daily lives.

What Does FOMO Mean?

FOMO stands for the fear of missing out. This can refer to the sense of disappointment over missing a specific fun event, or the general feeling of wasting your life while others enjoy more fulfilling experiences. According to Urban Dictionary, FOMO is:

While Urban Dictionary is known for defining unofficial words or cultural slang, FOMO has been added to other, reputable dictionaries including Merriam-Webster, Oxford Living Dictionaries, and the Cambridge English dictionary. This term, once slang for the younger generations, has become commonly understood by people of all ages and studied by social scientists.

The origin of the term FOMO dates back to 1996, when it was coined by marketing strategist Dan Herman. Herman later used the term in an op-ed piece while at Harvard Business School in 2000. Since then, the term has been slowly adopted online, and has become even more prevalent with the rise of social media.

Fear of Missing Out

The fear of missing out is pervasive, and FOMO can be applied to a variety of situations.

Friends are going out to a new bar and you’re stuck at work? FOMO.

You see pictures of a relative’s trip abroad? FOMO – why aren’t I traveling more?

That concert you forgot to get tickets for that’s all over everyone’s Instagram stories? Major FOMO.

FOMO doesn’t have to be about a specific evening you missed out on or the concert tickets you couldn’t afford, however. FOMO can be used in regard to the general feeling that you’re missing out on the best possible thing or that you’ll regret your choices later in life.

Herman, who came up with the term FOMO, also coined the not-so-widely used, but still relevant, terms FOBO (fear of a better option) and FODA (fear of doing anything).

FOMO (fear of missing out) leads to FOBO (fear of a better option), as you worry about what the best possible choice is. All of that social anxiety leads to FODA: fear of doing anything, as you worry that none of your options are good enough and give up entirely.

The Psychology of FOMO

While some may scoff at the severity of FOMO, social scientists have researched the phenomenon. Scientists at Carleton and McGill Universities looked into the psychological basis of FOMO in a study recently published in Motivation and Emotion.

In a primary study the scientists looked at first-year college students and monitored their sense of FOMO. They predicted that FOMO would be associated with other negative outcomes like stress, negative emotions, fatigue, and sleep issues.

The study did, indeed, show these negative outcomes in relation to feelings of FOMO. Students reported stress, fatigue, sleep problems, and other psychosomatic symptoms in response to their FOMO. The study also looked at how certain personality traits figured into FOMO, but the results did not support any correlation: everyone experiences FOMO sometimes.

The FOMO epidemic has been largely linked to social media. We see our friends or even strangers living it up online and feel like our weekend was inadequate in comparison.

One of the reasons many people believe FOMO has become so pervasive is because we’re seeing so much of each other online. In the years before social media, you may have heard about the party you missed, but everyone’s fun pictures from the party weren’t thrown in your face across various social media platforms.

While many link FOMO to the rise of social media, a secondary study by the same scientists at Carleton and McGill Universities concluded that social media may not be totally to blame. An article by Psychology Today revealed that:

“FOMO was felt no matter how the person found out about the alternate social activity on which they were missing out. Hearing it from a friend versus social media produced the same amount of FOMO”

Social media certainly impacts FOMO to some degree: we’re more likely to notice a fun event we missed out on or realize just how great it looked on our socials. But FOMO can be felt regardless of social media, and the anxiety over living your best life is triggered both online and in real life.

How to Overcome Social Media FOMO

Unfortunately, a natural instinct when feeling FOMO online is to check even more often so that we don’t miss anything. FOMO drives humans both towards and away from social media. We can use social media to feel connected to others online, but it also can lead to feelings of isolation.

Most psychologists and others who have studied FOMO recommend taking breaks from social media to relieve that overwhelming sense of “what if?” You don’t have to totally unplug – that may lead to feelings of FOMO about missing things online and feeling totally unaware of what you should even feel FOMO over. Simply try to cut down on your time online and focus on your surroundings.

Instagram allows you to set reminders when you’ve reached your daily allotment of time on the app. You won’t get kicked off, just reminded gently that your planned time for the day is up. Some have found success in simply turning their phones off for an hour at a time or putting it away somewhere.

Other psychologists suggest re-framing your perspective: instead of worrying about everything you could be doing, focus on what you enjoy doing. Comparing yourself to others online is unhealthy and can lead to worse mental health issues. Remind yourself that social media is curated: those people who look like they’re having a great time aren’t sharing their boring nights in, but they have them too. No one has Instagram-worthy nights every night – everyone feels FOMO sometimes.

The catch-all cure to FOMO has not been discovered yet. Social Buddy’s recommendation? Practice unplugging from social media when you’re with friends or participating in an activity you enjoy. Put down the phone, look around, and find something to be grateful for in that moment rather than worrying about what could have been.