What Does HMU Mean? 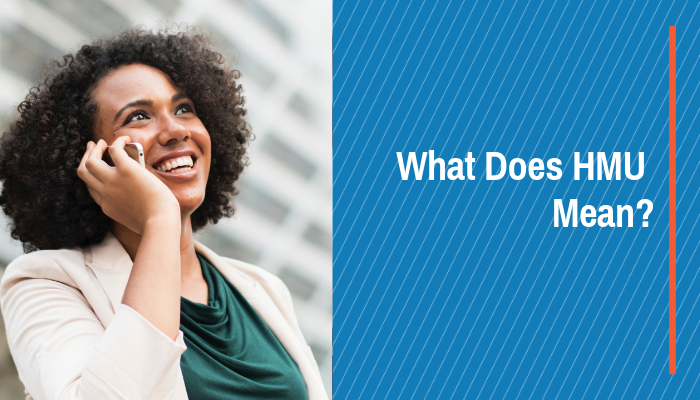 Gone are the days when you would type an entire sentence to express what you’re feeling. The current day and age is the age of acronyms, and many words and phrases are abbreviated online. Acronyms started gaining momentum around the 1990s to early 2000s, when instant messaging and social media platforms became popular. While some of these acronyms have grown obsolete, others have stood the test of time like LOL or LMAO. Not everyone may be up-to-date on their acronyms. One that you may not know is HMU. If you aren’t familiar with HMU, Social Buddy is here to explain the meaning and how to use this acronym.

The Meaning Of HMU

HMU is the online acronym for “Hit Me Up”. It is used to tell someone to contact you, whether it be via phone call, text, or on social media. In certain cases, it might also mean “Give me a phone call”, or “Follow up with me on this”, although it is usually used informally.

To put it simply, it is one of the most modern and shorthand ways for inviting a person to speak with you. HMU doesn’t imply that you are required to communicate with the person right away. Often HMU implies that you should contact that person at a later date, depending on context.

As you already know, HMU is apart of an online slang that is used while chatting, texting, sending instant messages, or emailing online. The expression HMU, just like several other online expressions, is a part of the online culture of conversation.

HMU can be spelled in both upper and lowercase, as both ways imply the same thing. Lowercase tends to be perceived as a more casual form of communication.

HMU has also been used to mean “hook me up”, but this translation is far less common. When used this way, it is a request to set someone up with something, be it a date with a friend, food, a job, etc. HMU has also been used jokingly as “hold my unicorn” in meme culture as a joke about what HMU may mean, or to confuse those who do not know its real meaning.