What Does IDK Mean? 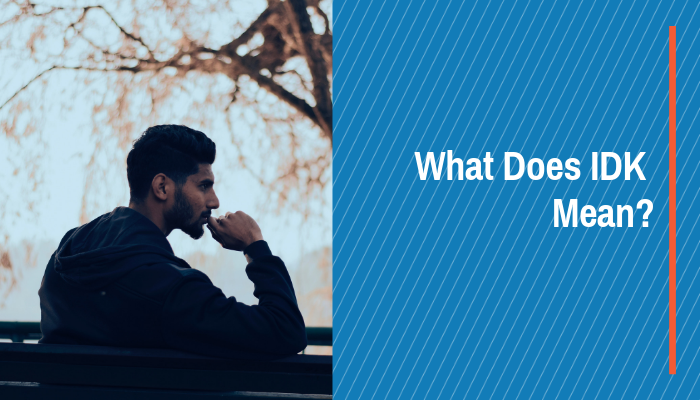 With the creation of short messaging service (SMS), better known simply as texting, a new language of abbreviations and text-speak was created as well. In modern online communications, many users prefer using acronyms like LOL, SMH, and WYD rather than typing in full sentences. Over time, these acronyms became apart of everyday conversation. Still, many people aren’t well versed in these acronyms and other internet shorthand. IDK is a fairly common text abbreviation; for your convenience, Social Buddy will cover the meaning of IDK and how you should incorporate it into your online vocabulary.

IDK is a part of the recently developed dialect of abbreviations used by young people online. This dialect is usually incorporated in informal communication, especially when someone is speaking through text or instant messages or on social media. This phrase has been extensively used since 2002.

The Meaning Of IDK

IDK is the abbreviation for “I don’t know”, a commonly used phrase in real life and in online communication. Rather than typing the full sentence, “I don’t know”, many people will simply type “IDK” to express their lack of information. Generally, IDK is used in regular conversations between friends when one cannot answer a question that has been asked.

The term IDK is generally pretty straightforward. Most uses of IDK are meant as the literal translation, “I don’t know”. IDK can be used on its own or in the middle of a cohesive sentence, for example, if somewhere asked if you know where the closest gas station is, you could answer, “No, IDK where it is”. When used on its own, IDK can appear blunt or too short in a rude manner. IDK can appear to be a blowoff of sorts when used in a rude or overly short context.