What Does TBH Mean? 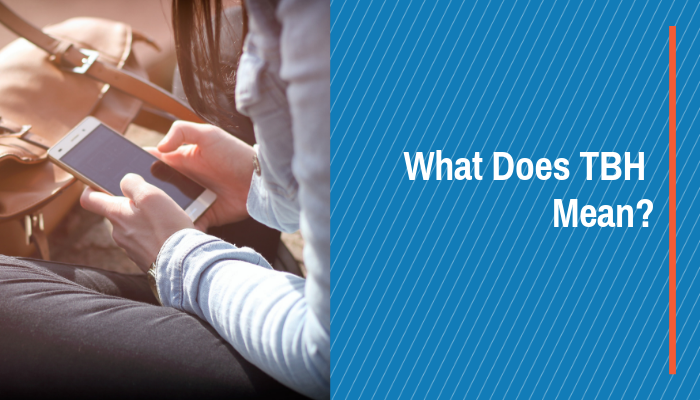 Internet acronyms have been frequently used since the advent of the internet. While you’ll always find a couple of common and conventional acronyms like LOL and WYD, there are some less popular ones as well that deserve all your attention. TBH is not one of the most well-know abbreviations, but it is widely used regardless. But what exactly does TBH mean and how is it used? As you read through, you will find insight on what exactly TBH means and why it is so popularly used.

The Meaning Of TBH

The acronym TBH generally means “to be honest”. It is used when an individual wants to be frank while discussing something. You can understand the concept of this acronym better with the following example:

Speaker 1: How do we accommodate more refugees? Our country can’t even manage its current population right now.

Speaker 2: TBH, refugees are actually good for our overall community.

Since its inception, TBH has been used extensively by teenagers, particularly the ones who avidly use social media. It was through these social media platforms that this connotation managed to gain so much attention. TBH was often used to spark a conversation online: social media users, mostly teens, would post “Like for a TBH” and respond by posting their honest thoughts about that person. The (usually) complimentary nature of this practice made TBH popular, and the acronym alone started being used as a positive comment.

I’m really just watching the #SuperBowlLIII for the commercials. #TBH

TBH as a term can be both critical as well as complimentary depending on the context. When you use it to criticize someone or to comment sarcastically, it can be extremely harmful. However, if somebody posts a photo and gets a comment saying “TBH, you look awesome in this picture”, the intent becomes a complimentary one.

Does TBH Have Any Additional Connotations?

TBH doesn’t have any other specific connotation other than being completely honest. So if you want to vent or share something innately personal, you can always team it up with a TBH for some extra edge.