What Does WCW Mean? 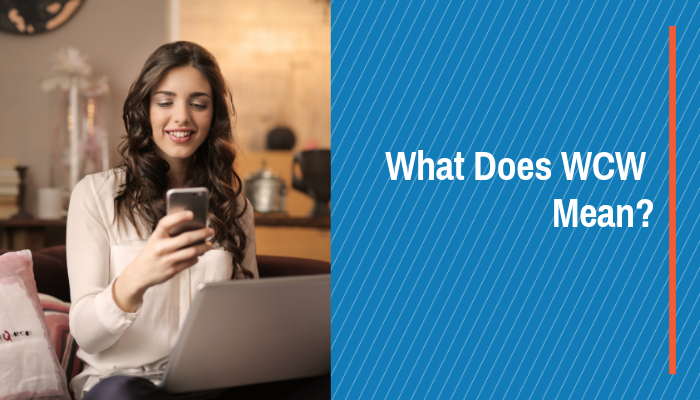 With the ever-growing presence of the internet in our daily lives, internet and text-based acronyms have become increasingly prevalent and popular. Many people on and offline are familiar with common acronyms like LMAO, LOL, and FML, but there are plenty of other abbreviations to consider. One text acronym that you may not know is WCW. So, what exactly is WCW and how is it used? Read on to learn what WCW means and how you can use it.

The Meaning of WCW

Typically, WCW stands for “woman crush Wednesday”. It is an incredibly popular hashtag that initially started on Twitter. People use this acronym for tagging posts about the ladies that they admire or find incredibly attractive. Over time, it spread to other leading social networking platforms like Tumblr, Facebook and Instagram.

The actual meaning of WCW will vary depending on the context you’re using it in. For instance, certain individuals prefer using it as an abbreviation for World Championship Wrestling. Both interpretations of this abbreviation are valid, so you’ll have to figure out which one was meant based on the context of its use. If someone posts a picture of an attractive female wrestler, it may be difficult to tell. Otherwise, you should be able to figure out which version was intended.

How To Use WCW

Many individuals use the #WCW hashtag on Twitter, as the platform only allows you to add 280 characters for every post and using this abbreviation saves characters. But there are also users who prefer writing the full phrase Woman Crush Wednesday. This is particularly popular on Facebook and Instagram where there aren’t any hard and fast rules about the length of captions. While coming up with a WCW post, you can interchangeably write women for woman and vice versa. Once you search for these hashtags, you will find hundreds of related posts lined up for you.

🔥❄️Women Crush Wednesday❄️🔥 ⠀⠀ Emilia Clarke ❤️ ⠀⠀ We’re pretty excited about the GOT premier so were counting down with our WCW post’s & giving you our fav character quotes! ⠀⠀ “The next time you raise a hand to me will be the last time you have hands” – Daenerys Targaryen ⠀⠀ #WCW #WomanCrushWednesday #GameofThrones #GOT #FireandIce

WCW is often used as a hashtag rather than on its own. When it comes to using WCW hashtags, it is ideally suggested that you post on a Wednesday. In this case, the second “W” in your tag will actually make sense. All you have to do is get a photo of your crush or significant other and hashtag #WomanCrushWednesday or #WCW.

While anyone under the sun can use this hashtag, it is particularly popular among those posting pictures of their girlfriends. Certain people also use this tag on the pictures of women whom they are unabashedly in love with, often including pictures of celebrities. Friends can also share pictures of their female friends and use the WCW hashtag to show them some respect and admiration online.

Since people of all genders can use it comfortably, you can always use the WCW hashtag for showing your admiration for the people who matter to you.

Using hashtags can help other users find your post, leading to likes, comments, and followers. If you’re looking to organically grow your Instagram following, sign up for Social Buddy.