What Does FML Mean? 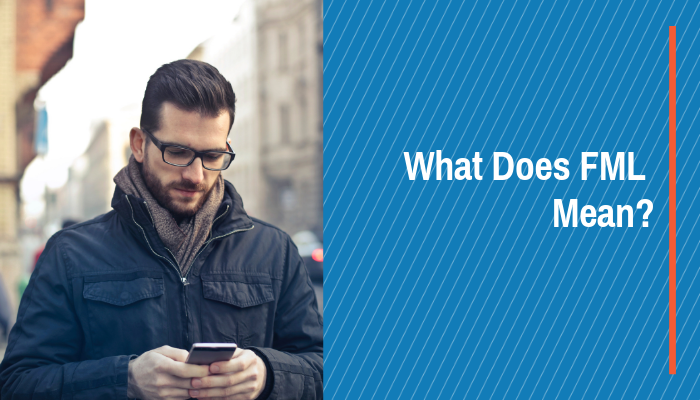 When short messaging service was first developed, we started using our own system of emoticons and abbreviations. In our current age, when social media has completely revolutionized the world, many tech savvy individuals are fond of using acronyms like LOL, SMH, WYD and many more. Over the last two decades, these acronyms have become a part of our everyday conversations. But despite that, many people aren’t well versed in text-talk. If you’re looking to decipher the meaning of FML and are wondering how exactly it is used, Social Buddy has everything that you need to know about it.

The Meaning of FML

Typically, FML means “Fuck My Life” and it is usually used out of frustration. Since this acronym clearly contains an expletive, you should use it with care so that you don’t offend whoever you are speaking to. FML is sometimes used angrily, but it is also sometimes used in a funny, self-deprecating manner.

FML can be used in situations where you’re feeling very low or are completely tired of your life. At that point you can emphatically say FML. An example of FML in a sentence could be, “I missed my plane, FML” or something like “FML, I just shattered my phone screen.” Despite its popular usage, we would still advise you to use FML in moderation, particularly while interacting formally, as it might lead to a negative connotation or appear unprofessional.

Does FML Have Any Alternative Versions?

FML is pretty much universally accepted as meaning “Fuck my life”, but there are some possible alternatives. Some other versions could be:  Forget my life. Funk my life. Feeling mighty low. Free my life. Fix my life. For my life. Find my luggage. Fix my lover. While these technically fit the letters of FML, these usages of FML are extremely uncommon. If you send someone “FML”, they will probably assume you mean the popular meaning of the abbreviation.

The Origin Of FML

The earliest definition of FML was added to Urban Dictionary in 2005, with the common meaning “fuck my life” as the entry. In 2009, a popular blog called FMyLife was created, sharing funny, cringe-worthy anecdotes ending with the phrase FML. The actual first use of FML is unknown.

A prank on Urban Dictionary suggested that the oldest meaning of FML was “fix my lighthouse”, along with a fake story about lighthouse owners getting teased and responding with “why don’t you fix my lighthouse?”. While it is the top definition for FML on that website, this meaning is totally fabricated.