What Does IDC Mean? 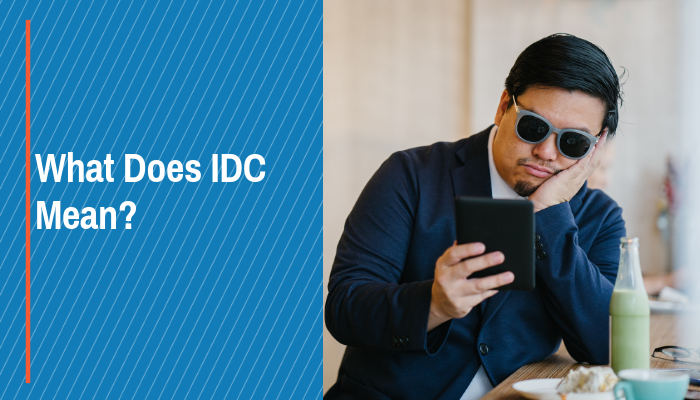 When it comes to internet and text slang, acronyms are often used to talk more efficiently. Many people are familiar with more commonly used acronyms like BFF, WYD, and LOL, but you may not know all of them. For example, one question that many people have is what does IDC mean?

This acronym simply stands for “I don’t care.” It can be used in a sentence or by itself. It’s used to denote that the person doesn’t have a strong opinion about the question being asked or a particular subject. One example of how IDC could be used would be if a person was asked what they wanted for lunch. A response could be: “IDC. You choose.” This means that the person doesn’t care much about where they are going to lunch.

Although IDC is the main form of this acronym, there are some alternate versions that say essentially the same thing. If someone uses IDRC, it means “I don’t really care” which sends almost the same message as IDC, but with the added “really” to accentuate your indifference. A similar alternative is IDEC, meaning “I don’t even care”.

Another alternative to IDC is IDFC, which means “I don’t fucking care”. This version of IDC is generally harsher because of the added profanity, and tends to be used more in anger than the casual usage of IDC.

IDC is very similar and often mistaken for IDK. While the first two words of this acronyms are the same (I don’t), IDK means I don’t know. While these are similar, replacing IDK for IDC can result in confusion.

IDC can be used in all uppercase letters or lowercase. Proper acronyms are generally in all caps, but using the lowercase idc is a more casual, less formal usage.

Since IDC is an acronym that’s often seen as being sarcastic and uncaring, you’ll want to be careful how you use it in any type of scenario. Although it is commonly used among good friends who know each other well and know not to take offense, you may find that it may not be taken well by a person who doesn’t have a good understanding of modern slang. However, if you find this acronym too short or sarcastic, don’t take offense – many people use IDC casually and without any intended sass.